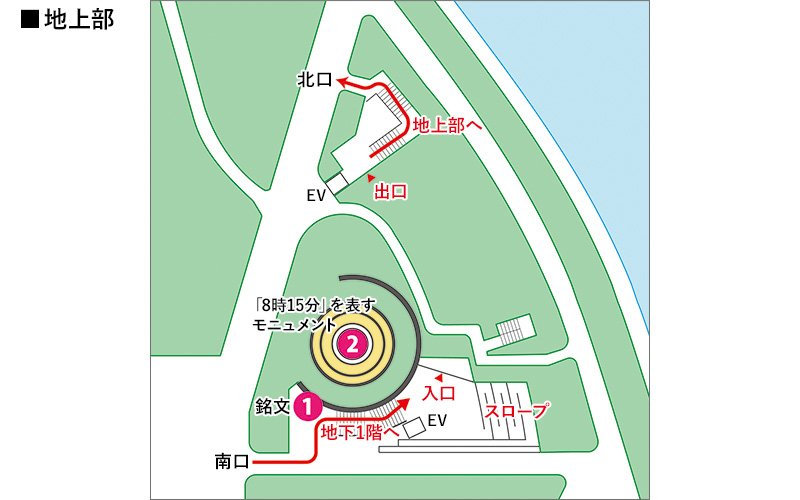 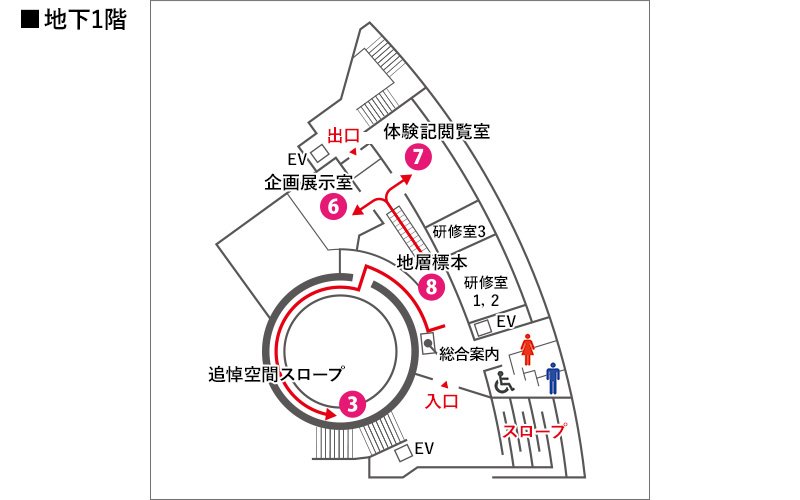 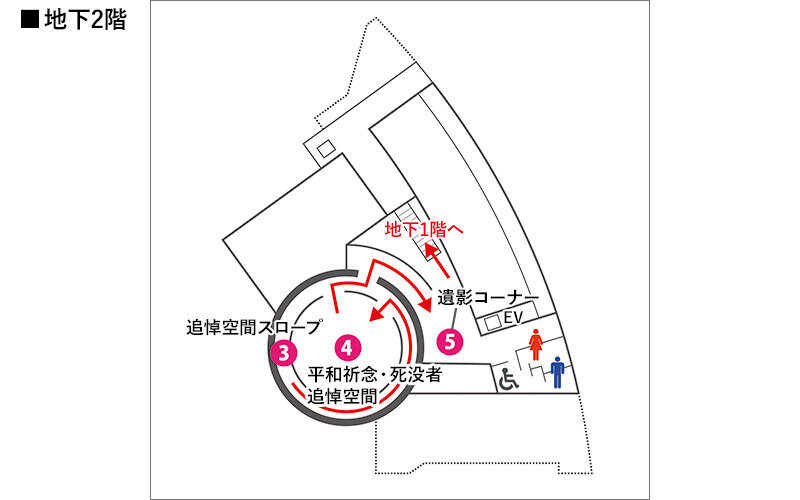 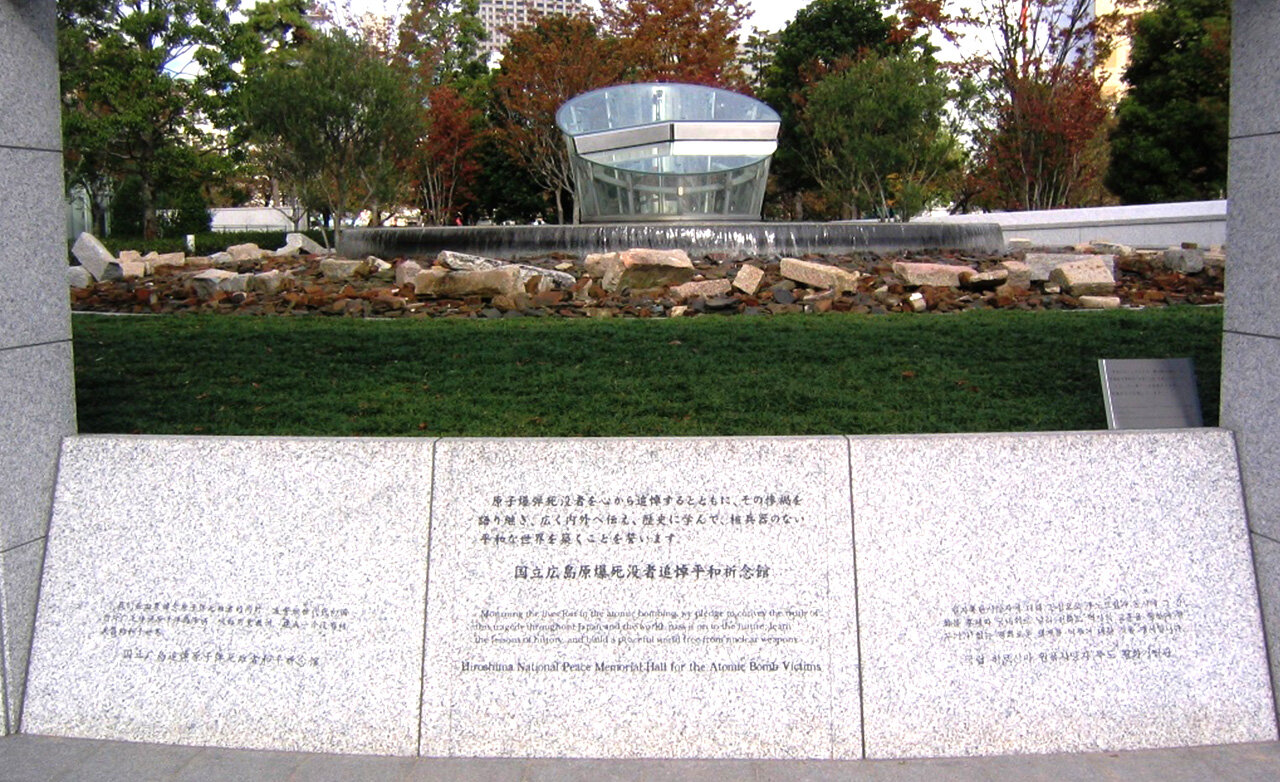 Mourning the lives lost in the atomic bombing, we pledge to convey the truth of this tragedy throughout Japan and the world, pass it on to the future, learn the lessons of history, and build a peaceful world free from nuclear weapons.

The philosophy of the Memorial Hall is written in English, Chinese, Korean, and Japanese. 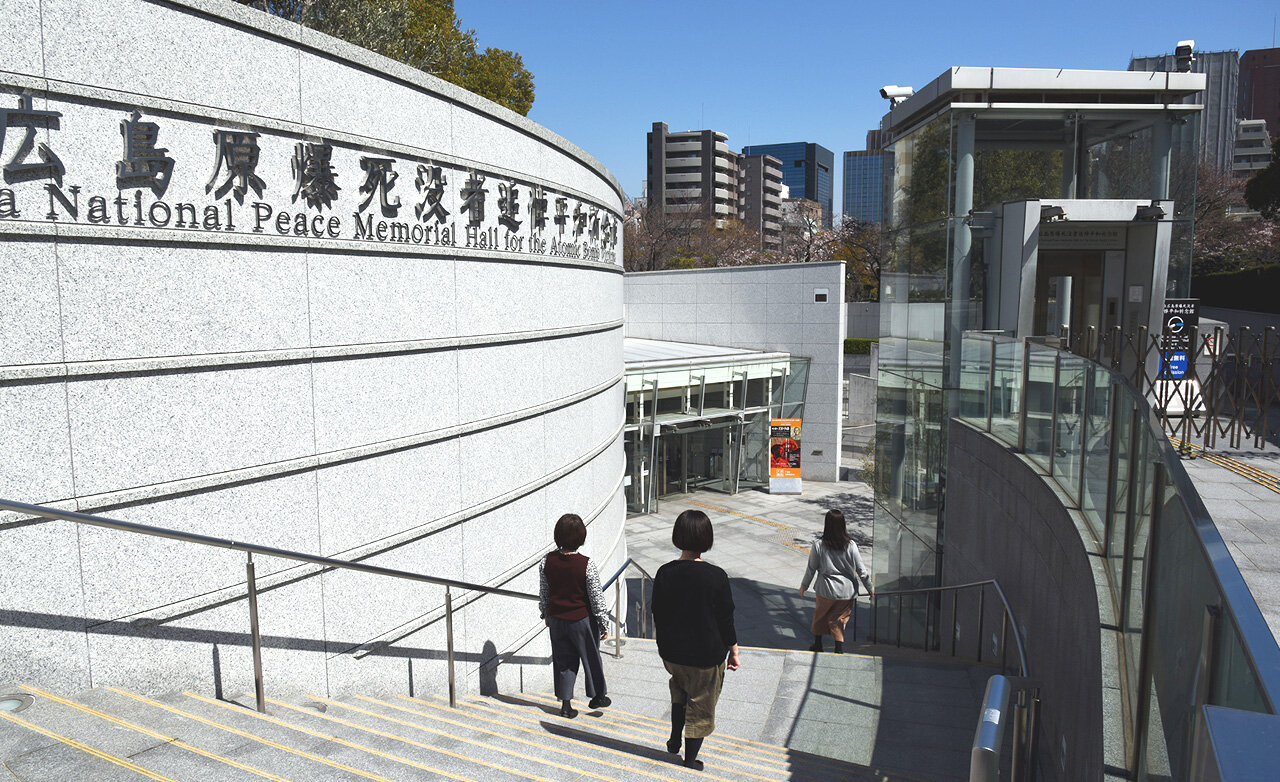 The entrance/exit is on the Upper Level.

This monument, which expresses the time of the bombing, was built with a fountain to console those who died without having been given the water they so desperately wanted. Around the monument is debris which was burned and broken by the bombing (discovered during the construction of the Memorial Hall). Looking at the monument from the front, visitors face the direction of the epicenter.

Slope to the Hall of Remembrance 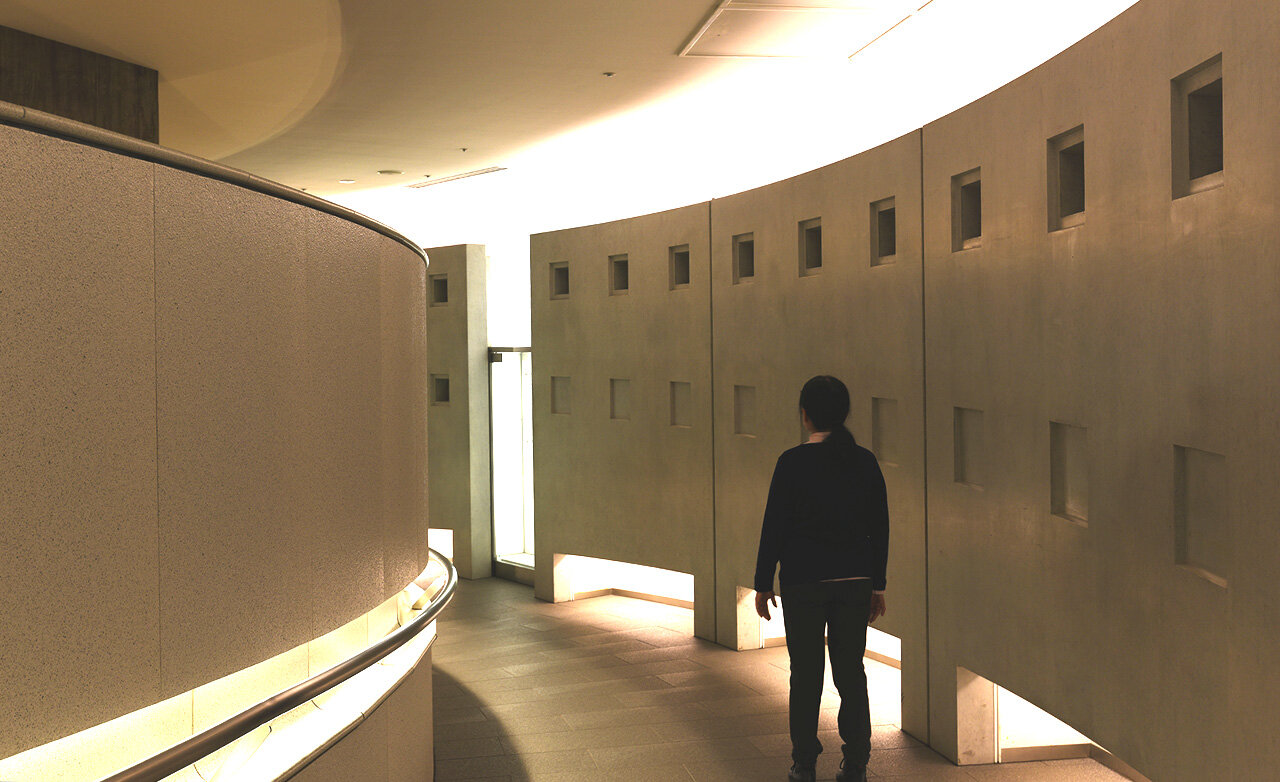 Descending the slope counter-clockwise, back in time.

From the Upper Level, you descend the slope to the Hall of Remembrance counter-clockwise, back in time to Hiroshima just after the bombing.

There are countless black dots visible on the walls of the slope and the walls of the Hall of Remembrance: there are bits of soil which were excavated from the soil layer at the time of the bombing during the construction of the Memorial Hall. They have been mixed in with the materials of the walls. 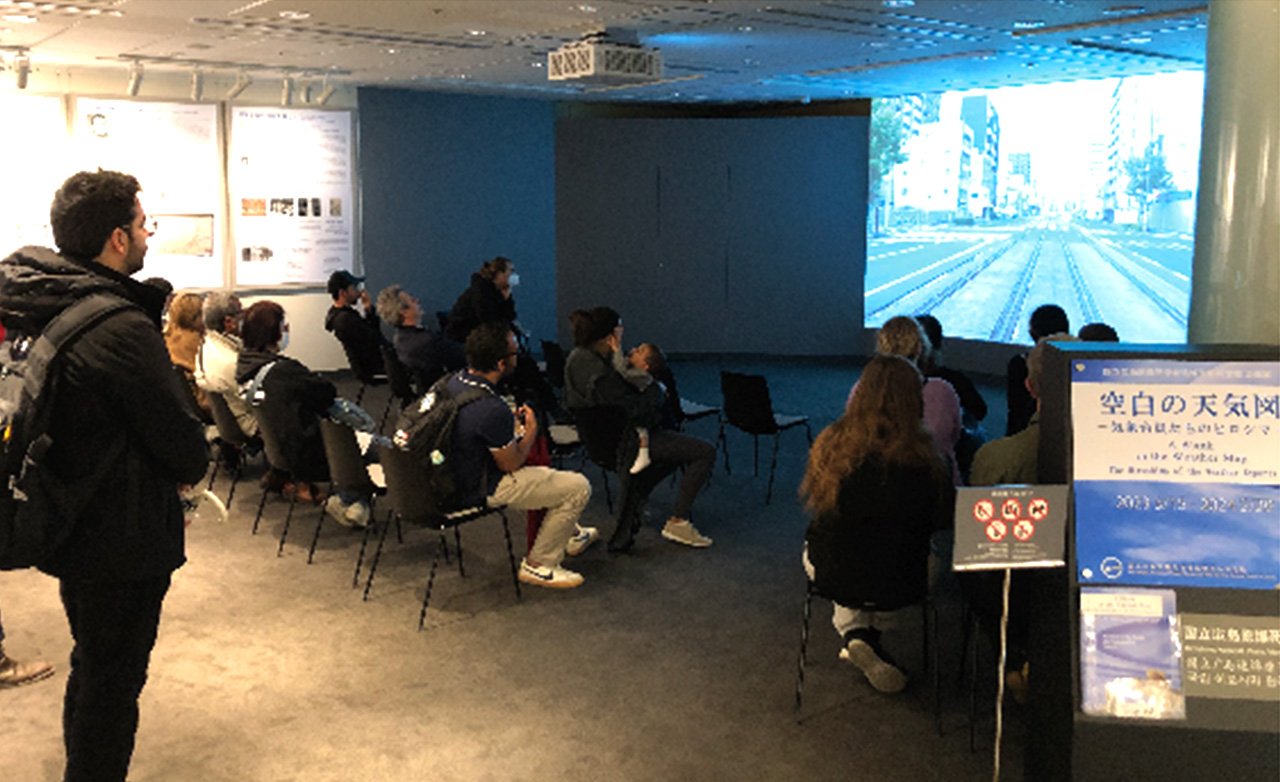 Each year, we hold Special Exhibitions which introduce atomic bomb memoirs based on a central topic. We also create a video presentation which explains the realities of the atomic bombing in easy to understand terms and screen them on our large projection screen, along with displaying related pictures and artifacts. 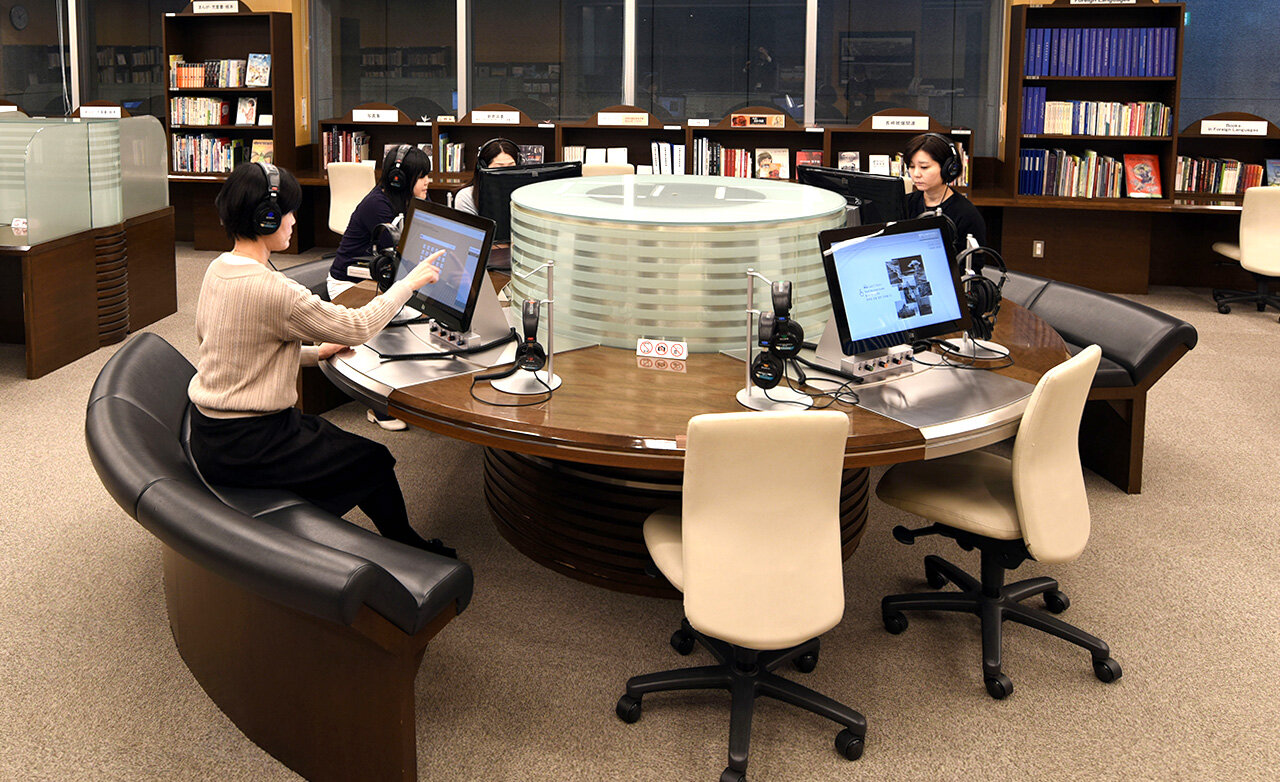 Visitors are free to search/watch materials through our materials search terminals.

Visitors are free to read/watch the following materials in our Library: 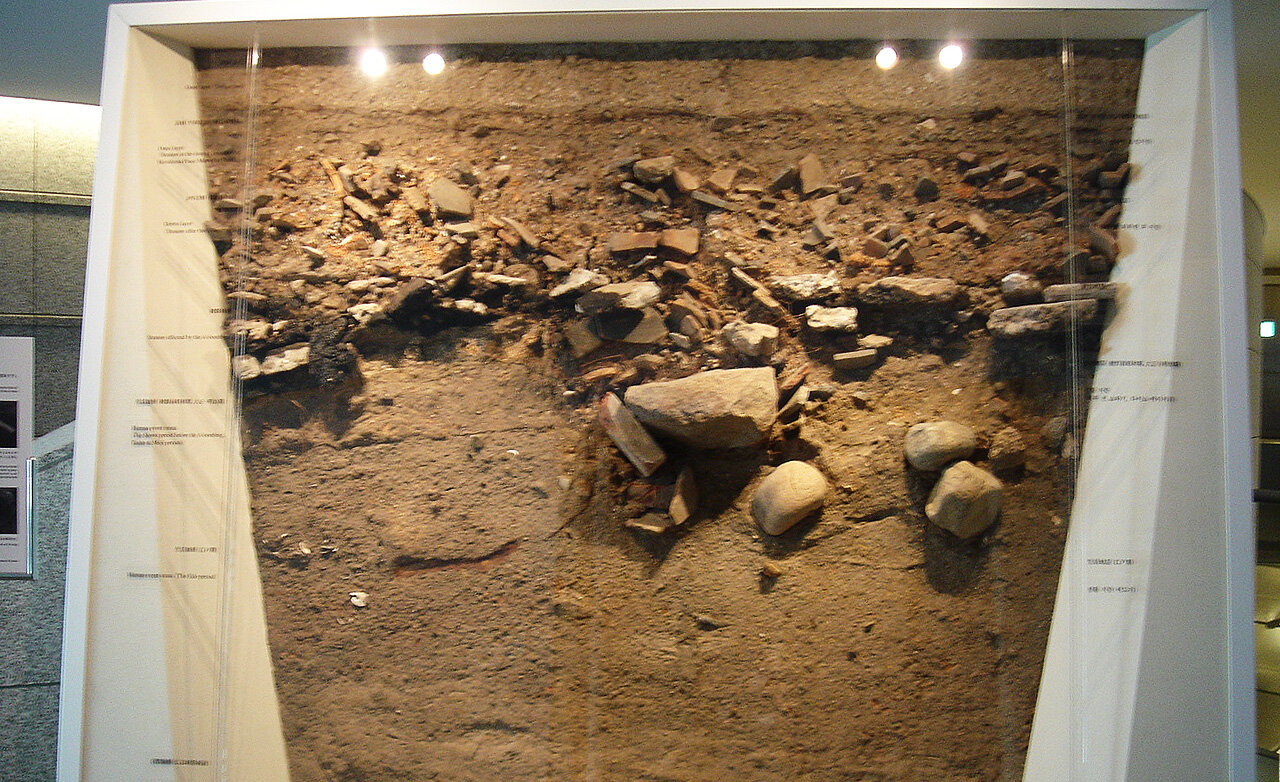 This stratum cross-section was taken during an excavation survey of the land before the construction of the Memorial Hall, showing visitors what the ground beneath the current Peace Memorial Park looks like.

The Hall of Remembrance 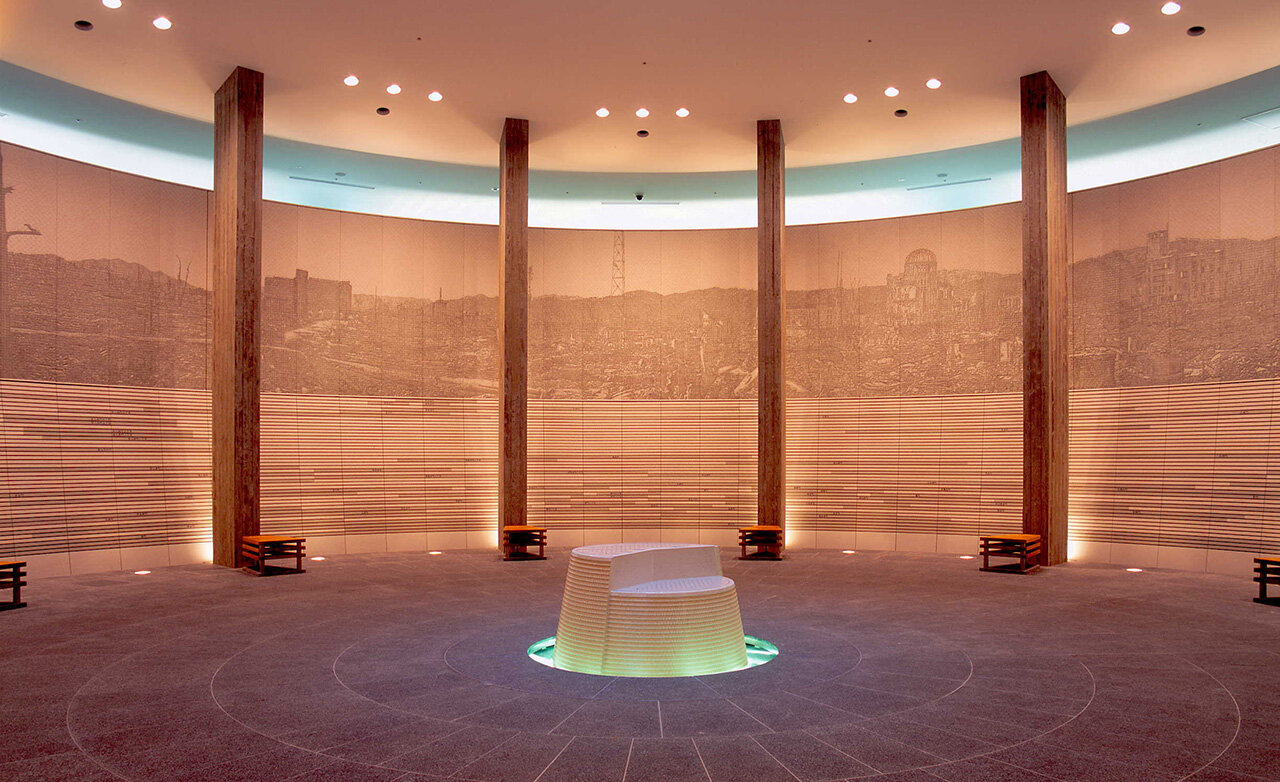 Use this space to quietly reflect on those who lost their lives and pray for peace.

The wall is comprised of a 360°panoramic photo of Hiroshima after the bombing as seen from the hypocenter (Shima Hospital), made of roughly 140,000 tiles (the number of those estimated to have passed away by the end of 1945). The panorama itself was created based on a photograph taken by the US military in October 1945. Underneath are the names of 226 towns which existed at the time of the bombing in their respective directions. The Hall of Remembrance is 55 meters in perimeter, 17.25 meters in diameter, and 8 meters from floor to ceiling.

The central monument displays the time of the bombing (8:15 am), and provides water to console the victims who passed away that day without the water they craved. 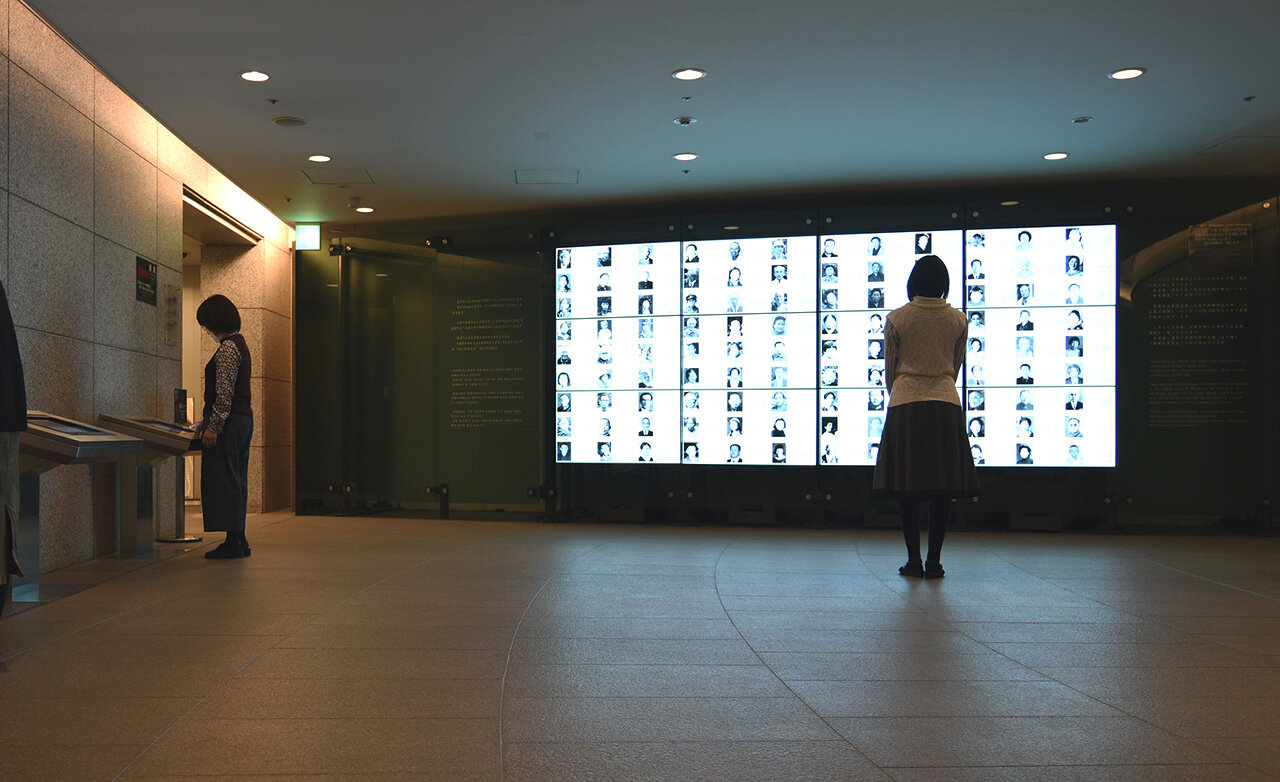 The names and portraits of the victims are played on a loop.

Through the portraits and names of countless victims of the bombing, we convey to visitors the reality of the lives lost indiscriminately, regardless of age, gender, or profession, to the bombing.

Have a look inside the Memorial Hall using Google Streetview!

Return to top of page